Dresses fit for a queen 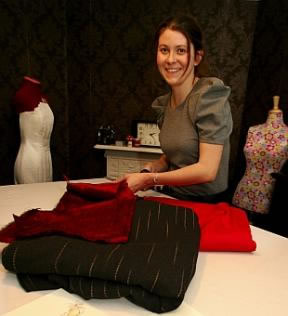 DRESSMAKER Alison Pordum can truly claim her couture gowns are fit for a queen.

The talented 32-year-old has been designing outfits for the Queen and other members of the royal household for the best part of 10 years.

Alison, whose dresses cost more than £2,000, used to get up at 4.15am every weekday to commute to Buckingham Palace from Bournemouth until she left to set up her own design studio at her Talbot Woods home.

“I love what I do and I thoroughly enjoyed working for the Queen,” she says. “I can’t tell you how nice she is! She’s amazing. I met her many times over the years and she was always very friendly and approachable.”

But Alison, who cites Dior and Valentino as among her favourite designers, reveals she always felt slightly apprehensive before a fitting with the Queen.

“She was always the same, absolutely lovely, but I still felt a little nervous every time I walked in the room because you can never forget that she’s the Queen of England.

“But once you get to work you know what you have to do and you just get on with the job.”

The softly-spoken former Brockenhurst College student graduated from the Winchester School of Art in 1999, and soon landed her first job working for Maureen Rose, one of the Queen’s out-of-house dressmakers.

“It was invaluable experience, and I learned a lot working for Maureen.

“On my very first day she gave me one of the Queen’s dresses to work on, and said I may as well start with the best!”

Although Alison had to sign a confidentiality document that prevents her from revealing too much detail about life at the palace, she recalls the first time she met the Queen.

“I was very nervous, I don’t think that I talked at all.

“There is certain protocol that you have to follow.

“You have to curtsey and say ‘Good Afternoon Your Majesty’.

“I did have one disaster in the early days, when I accidentally cut a sleeve off one of the Queen’s dresses – but we managed to work around it!”

Alison worked for Maureen Rose until mid-2003, when she went freelance for a while, before applying for a job as the Queen’s in-house dressmaker the following year.

“I had to go to Buckingham Palace for an interview. There was lots of form-filling and security checks. The process took about nine weeks from start to finish.”

For the next four years, Alison, who married her college sweetheart last September, worked at the palace as head of a team of three dressmakers.

“Daywear has to be a certain length, but I loved working on the eveningwear because of all the beautiful fabrics and there’s a bit more flexibility with hem lengths.” Alison is prevented from identifying which items in the regal wardrobe were her handiwork, but if you put her name into an internet search engine you’ll find she designed many of the Queen’s classic outfits.

However, she maintains that she treats all her clients like royalty – whether they have blue blood or not!

“I always treat my clients the same way. I love to design bespoke clothes for all ages and special occasions – couture means that everything is done by hand.”

According to a tabloid newspaper, Alison left the palace in 2008 following an alleged rift with the Queen’s personal assistant Angela Kelly, but she maintains it was the long commute that prompted her to quit.

“I’d like to go back to the palace one day – but for now I want to express my own design ideas, and I’m looking forward to having clients closer to home.”